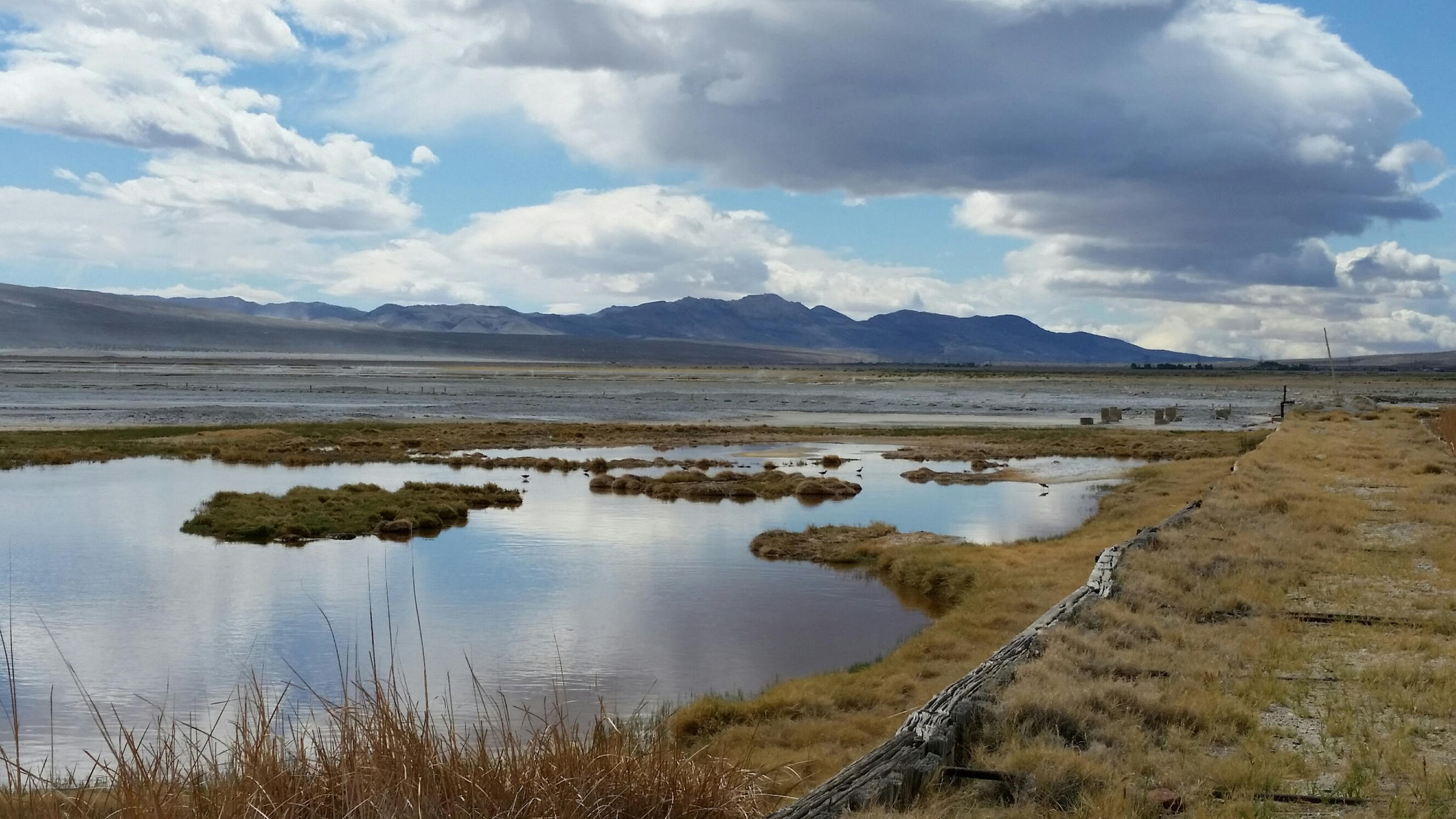 Audubon California is working with Eastern Sierra Audubon to take advantage of a unique opportunity to support migratory birds at Owens Lake.

Before its waters were diverted in 1913,Owens Lake was one of the most spectacular places for birds in California. Famed naturalist Joseph Grinnell in 1917 described, “Great numbers of water birds are in sight along the shore – Avocets, Phalaropes and Ducks. Large flocks of shorebirds in flight over the water in the distance, wheeling about show en masse, now silvery now dark, against the gray-blue of the water.” But as the water went, so too did most of the birds.

Now, there is an opportunity to restore much of the natural heritage that Grinnell witnessed long ago. After the Los Angeles Department of Water and Power agreed to rewater parts of the lakebed to reduce dust pollution, birds have been returning in large numbers.Audubon California and Eastern Sierra Audubon are working closely with government agencies and others to arrive at a permanent framework for protecting habitat for the thousands of waterbirds and shorebirds that now depend on the lakebed.

The 110-square-mile Owens Lake is located at the southern end of the OwensValley, surrounded by the southern Sierra Nevada on the west and the Inyo Mountains to the east. The size and location of the valley attracted the interest of the LADWP, which was looking to provide water to support the incredible population growth in Southern Californiain the early 20th Century. By the mid 1920’s, Owens River and Owens Lake were turned nearly dry year-round.

In addition to devastating bird and wildlife habitat, the water diversions created a tremendous air pollution hazard, as dust from the exposed lakebed in the valley far exceeded national air quality standards. After the U.S. Environmental Protection Agency required the state to address this pollution, the Great Basin Air Pollution Control District ordered the LADWP to begin flooding portions of the dry bed and encourage the growth of native vegetation to keep the dust out of the air.

These efforts have created new usable habitat for birds. In the spring and fall, tens of thousands of shorebirds, waterfowl, and other migratory species now stop-over to feed on the millions of brine flies and other invertebrates that collect on the lakebed’s surface. Traveling from as far as South America to the far north of North America, the migration of these birds are one of nature’s awesome spectacles. As many as 22 different species of shorebirds have been recorded in a single day and 15 bird Species of Special Concern use the habitats on and around the lakebed.

Snowy Plovers (listed in California as a Bird Species of Special Concern), have expanded their territories out from the lake margins, finding ideal habitat and food on shallow-flooded habitat. As a result, numbers of breeding plovers have nearly tripled in the past decade. Over a thousand American Avocets now nest on the lakebed, along with smaller numbers of Black-necked Stilts. Migrating waterfowl stop at the lake, and some species such as Gadwall and Mallard, have returned as breeders. Single-day lake-wide counts in spring or fall migration tally 40,000-60,000 birds. Experts expect that the area will attract even greater numbers of birds in the future.

In order to recognize and bring attention to the remnant bird populations still existing on the mostly dry lakebed, the NationalAudubonSociety in 2001 declared the area an Important Bird Area, a designation that is part of a global program to recognize exemplary sites that contain significant habitat for breeding, migrating, and/or wintering birds. In 2007, Audubon California and Eastern Sierra Audubon began working with the LADWP, the Department of Fish and Game, and the Great Basin Air Pollution Control District to identify key habitats and species on the lake bed, their threats, and new conservation strategies to ensure lasting protection of the habitat and species occurring on the lakebed.

In 2010, these discussions expanded, with the support of Los Angeles Department of Water and Power, into a formal Master Planning process with a goal of creating a long-term and enforceable agreement to balance dust control, conservation, and other interest/uses on the lake. These include recreation, mining, grazing, Native American interests, water bottling, renewable energy development, and local economic development.

For Audubon California and Eastern Sierra Audubon, this is a remarkable opportunity to return at least part of Owens Lake to its traditional greatness as a home for birds and other wildlife.