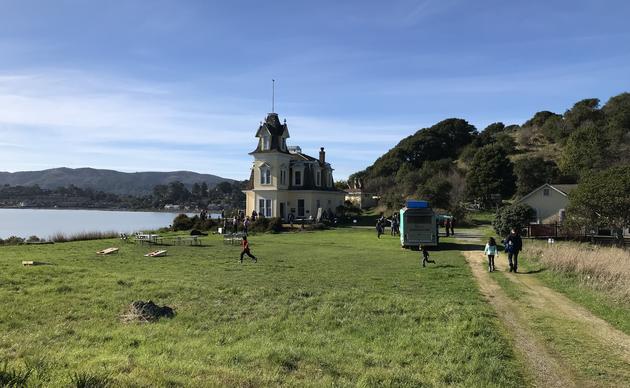 Imagine you’re a Black-footed Albatross parent. You’ve travelled on seven-foot wings over 3,000 miles from your breeding grounds on Midway Atoll National Wildlife Refuge, to the food-rich shelf break 25 miles off the coast of California. As dawn breaks you pick up a neon flying squid. Then, you see a sablefish commercial fishing vessel and check it out in the hopes of picking up some floating fish chunks to bring back to your newly hatched chick. But then flapping orange streamer lines required by law on these vessels discourage you from attacking the baited hooks—saving your life as well as that of your chick.

Now, despite strong opposition by sport fishermen, Audubon, and other concerned stakeholders, federal fisheries managers are considering permitting new pelagic (“open ocean”) longline fisheries off the West Coast. As opposed to much shorter, better tended lines used to catch our halibut, rockfish, sablefish and other local seafood, pelagic longlines average 40 miles long with 1800 hooks. It is impossible to actively tend this gear, and hooks left in the water for hours catch fish and wildlife indiscriminately. On average, the Hawaii-based pelagic longline fleet discards nearly half of the animals it catches, mostly injured or dead. This includes sea turtles, marine mammals, sharks, large fish that cannot be sold or are not targeted by the fishery (such as marlin), and albatrosses. The Hawaii-based fishery is frequently shut down over interactions with endangered loggerhead and critically endangered leatherback sea turtles.

Due to the indiscriminate and destructive results of this gear type, pelagic longlines have been prohibited off the west coast since 1989.

The global population of Black-footed Albatross is only about 134,000 breeding birds, and the species is most vulnerable to losses of adult, breeding age birds that have survived their first five years on the ocean. An average of 268 albatrosses, mostly Black-footed, were killed by the Hawaii-based pelagic longline fleet each year from 2010-2016, and the rate and number of albatrosses killed is increasing. Black-footed albatross are classified as “vulnerable” by the IUCN due to a variety of threats including bycatch, sea level rise, changes to the prey base, and invasive species. Federal fisheries managers have noted that high seas pelagic longline fisheries conducted by other nations that do not require seabird avoidance gear probably capture upwards of 10,000 or more North Pacific albatrosses- making it even more important for the U.S. to continue to be a leader in the reduction of albatross bycatch in fisheries.

In sum, there is no justification for establishing new pelagic longline fisheries on our west coast. This is especially true considering good alternatives are available for catching swordfish and tunas. New gears with lower bycatch offer alternatives for targeting swordfish that have wide public support. For a vibrant summary of these gear alternatives, see this three-minute video by the Pew Charitable Trusts about deep-set buoy gear-  the gear of the future to catch swordfish and tuna off the west coast.

Audubon California and our chapter partners in this effort, Sea and Sage Audubon and San Diego Audubon, have already told fisheries managers in written and spoken comment that we oppose scoping of a new west coast pelagic longline fishery, most recently at the June Pacific Fishery Management Council meeting in San Diego. We will ask for your voice to be heard in the coming months, to support our Audubon message to fisheries managers—when it comes to pelagic longlines, don’t take the bait.