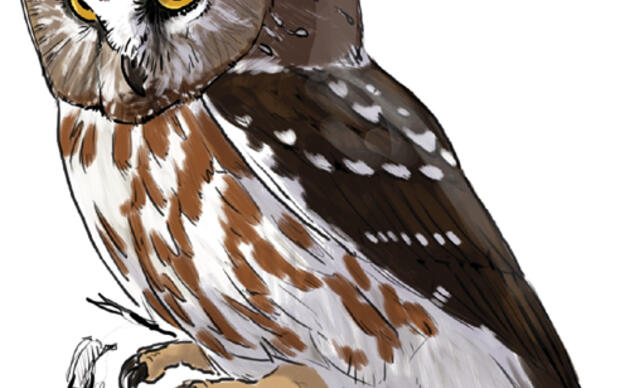 Secretary Jewell’s signing of the Desert Renewable Energy Conservation Plan was the culmination of years of hard work. Audubon’s role was showing there doesn’t have to be a choice of renewable energy or bird safety when the proper guidelines are put into place. This plan does just that, it stops state and federal fast-tracking of renewable energy projects without considering their ecological impacts. DRECP aims to consider the development of renewable energy in tandem with conservation goals.

Why the focus on deserts? Deserts have become the most desired location for renewable energy development. There are many reasons for this, one of which is a lack of understanding about its ecological importance. Where the uneducated may see a hot, arid wasteland, Audubon and other wildlife advocates know that the desert landscape is teeming with unique species of flora and fauna. Get to know some of our favorite desert-dwelling friends by reading on.

These shy little birds are North America's smallest songbird. These diminutive birds flit about desert savannahs, woodlands, cacti patches and shrubbery. California's Mojave Desert has the most density of the bird. Development can negatively impact the species because it relies on trees for shade and protection.  More...

A species that still causes debate among ornithologists about its various populations and subspecies, the Cactus Wren is a California Species of Special Concern. It hunts for insects on the desert floor, protected by shade from vegetation. It is vulnerable during breeding season because it will often nest near busy roads, mistaking them for natural open space. Read more..

The Le Conte's Thrasher is named after the man who first "discovered" it, Dr. Jon Le Conte, a Boston entomologist, in late 1850 or early 1851. It is a California Species of Special Concern and is found almost exclusively in the state, with smaller populations seen in Mexico and other parts of the Southwestern United States. It is the most terrestrial of the thrashers, acting like a smaller version of a roadrunner. Its favorite habitat is not the dream location of any California-based seasonal allergy sufferer because it would be one where California juniper occurs. This is most often found in the high deserts of California, like Antelope Valley or Owens Valley, making this bird a great poster child for the Desert Renewable Energy Conservation Plan. Read more...

While the Greater Roadrunner doesn't hold any state special status, except for maybe a special place in our hearts, it is increasingly at risk from overdevelopment. It is a year-round resident that can be found in various regions of California, from Orange County coastal sagebrush to dense cacti patches in San Bernardino County. It relies on open fields during its breeding season and weedy patches to hunt in. Fragmentation in the landscape, which poorly sited renewable energy projects create, causes problems for the species, including: dangerous car traffic, poisonous weed killers and predation by introduced species. Read more...

Bendire's Thrashers enjoy desert habitat with tall vegetation like prickly pear, yucca and juniper. Unlike other thrashers, this bird migrates and can be found in California from March to August when it breeds here. They are a California Species of Special Concern and a North American Breeding Bird Survey held in 2014 showed an alarming 90% drop in population numbers. Researchers have pointed to development as one of the primary causes behind this drop. Read more...

Thank to the following references: