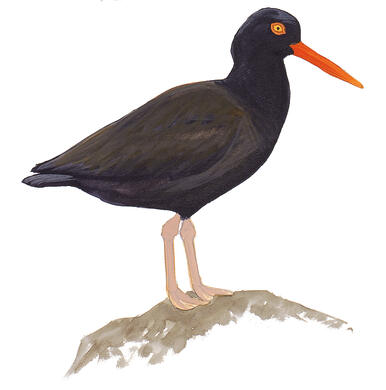 The California Department of Fish and Wildlife (CDFW) has proposed new regulations to protect some unassuming, but critical plants on the California coast: marine algae.  Audubon California supports these proposed regulations as they balance continued harvest on stable species, and protect two species that are suffering collapse. Join us in advocating for the protection of marine kelp and algae!

So what does algae have to do with birds?  Kelp and algae are the foundation the marine ecosystem.  Marine habitats are biogenetically structured- meaning that the growth and architecture of particular species creates habitat for other species within the ecosystem.  Bull kelp forests provides refuge for young fish, sea otters, and many invertebrates like sea urchins, sea stars, and crabs.  Rockweed (Fucus distichus) and red algae (Gracilaria) provide the perfect nursery for Pacific herring, a critical forage fish for many waterbirds and marine mammals. Sea palm is the favorite food of the limpet, the preferred food source of black oystercatcher parents when provisioning their chicks.

Sea palm is a particularly spectacular species.  This Seussian species thrives in the roughest environments, growing only where the waves crash the hardest.  Instead of swaying with the waves like other kelp and algae, sea palm is rigid- remaining upright taking each wave head on.  This spectacular species needs our help in order to remain a charismatic feature of California’s rocky intertidal.

Why do we need to advocate for new regulations?  Sea palm is one of many species of edible kelp. The CDFW report that, on average, over 7 tons of sea palm is commercially collected annually in California.  Long-term trends across sites in California, monitored since 1999, have revealed that sea palm decline was at its highest in 2015- with average percent loss between 87-100% when compared to the long-term average. Most sites have shown little recovery since, ranging between 0% at the southernmost sites to 25% at the northernmost sites with an average recovery equaling only 6%. This rapid, dramatic decline is likely due to climate change; yet, exacerbated by unrestricted commercial take.  British Columbia, Washington, and Oregon have already banned commercial sea palm harvest.  The proposed new regulations governing the commercial harvest of wild kelp and algae would help preserve these charismatic species while allowing commercial harvest and sale of many other species of marine algae that can be harvested sustainably.

The CDFW will consider a number of proposed regulation changes over 2020-2021.  The most important of which include the protection of collapsed populations of sea palm and bull kelp, the protection of critical herring spawning areas from commercial kelp and algae harvest, and assurance that all commercial take is properly reported.

Join us in protecting California’s kelp and algae!  To help you can:

Paige assists with volunteer engagement on Aramburu Island, helps run our native plant nursery, and leads the waterbird surveys of Richadson Bay using aerial drone imagry.  Paige engages with the Audubon Youth Leaders in addition to helping monitor the sanctuary for any boat violations. In the past, Paige has worked with the National Park Service on Alcatraz Island surveying, monitoring, and managing nesting waterbirds.  She also worked in the North Bay performing education and restoration work by leading local students and teachers in habitat restoration workdays.