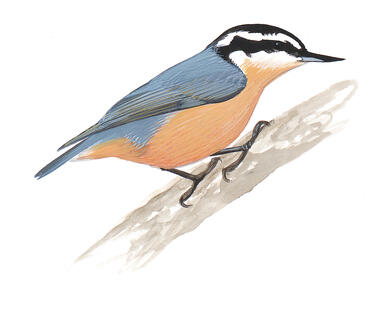 NEW YORK (October 10, 2019) – Today, the National Audubon Society announced a groundbreaking climate report, Survival by Degrees: 389 Bird Species on the Brink. “Two-thirds of America’s birds are threatened with extinction from climate change, but keeping global temperatures downwill help up to 76 percent of them. There’s hope in this report, but first, it’ll break your heart if you care about birds and what they tell us about the ecosystems we share with them. It’s a bird emergency,” said David Yarnold, (@david_yarnold), CEO and president of Audubon.

“A lot of people paid attention to last month’s report that North America has lost nearly a third of its birds. This new data pivots forward and imagines an even more frightening future,” Yarnold said. “And, you can use a first-of-its kind web tool to find threatened birds in your zip code, as well as a list of things everyone can do.”

Audubon’s report is based on the 2014 Intergovernmental Panel on Climate Change (IPCC) report models for 1.5, 2.0 and 3.0 degrees C of global warming. At the highest warming scenario of 3.0 C, 305 bird species face three or more climate-related impacts.

Last month, the journal Science published a study by a joint team of conservation biologists describing a grim picture: a steady decline of nearly three billion North American birds since 1970, primarily as a result of human activities. The Audubon report describes how climate change will further exacerbate the challenges birds are already facing from human activity.

“Birds are an intimate part of the landscapes that define our state, from the Brown Pelicans along our coasts to the Yellow-billed Magpies of the Central Valley to the California Quail that serves as a symbol of California itself,” said Sarah Rose, executive director of Audubon California. “Yet many of these iconic birds may disappear from those landscapes and even face extinction if we don’t act immediately to curb climate change. We know what the solutions are and we have the tools to avert the worst impacts; now it’s up to all of us to get to work. Audubon is engaging elected officials at every level of government, farmers, ranchers and bird lovers across California to help save the birds and landscapes we love.”

“Birds are important indicator species, because if an ecosystem is broken for birds, it is or soon will be for people too,” said Brooke Bateman, Ph.D., the senior climate scientist for the National Audubon Society. “When I was a child, my grandmother introduced me to the Common Loons that lived on the lake at my grandparent’s home in northern Wisconsin. Those loons are what drive my work today and I can’t imagine them leaving the U.S. entirely in summer but that’s what we’re facing if trends continue.”

Under the most extreme projections, California could face temperature increases of more than six degrees Fahrenheit in winter and up to nearly 10 degrees Fahrenheit in summer. The resulting changes in vegetation and habitat will mean that nearly half of California’s birds could lose a substantial part of their ranges as the climate warms. Some, including the Yellow-billed Magpie, are found nowhere else and could lose nearly all their range, ultimately even facing extinction. The report identifies six climate-related threats facing California, including sea level rise, extreme spring heat, spring droughts and fire weather. As elsewhere in North America, the worst effects of climate change can be averted by urgent action.

“We already know what we need to do to reduce global warming, and we already have a lot of the tools we need to take those steps. Now, what we need are more people committed to making sure those solutions are put into practice,” said Renee Stone, vice president of climate for the National Audubon Society. “Our elected officials at every level of government must hear from their constituents that this is a priority. Audubon is committed to protecting the places birds need now and in the future and taking action to address the root causes of climate change.”

The report details five key steps that all Californians can take to stave off the most extreme temperature scenario:

The report includes an interactive zip code-based tool, the Birds and Climate Visualizer, to help users understand the impacts to birds where they live, making climate change even more local, immediate and, for tens of millions of bird fans, deeply personal.

In 2014, Audubon published its first Birds and Climate Change Report. The study showed that more than half of the bird species in North America could lose at least half of their current ranges by 2080 due to rising temperatures. Audubon’s new findings reflect an expanded and more precise data set, and indicate the dire situation for birds and the places they need will continue.