Avian migration isn’t limited to spring and fall in Southern California; in fact, it happens almost every month of the year. Northbound “spring” migrant Allen’s Hummingbirds are on the move as early in the year as January, with Yellow-billed Cuckoos bringing up the rear of northbound migration in June. By the end of that same month “fall” migrants, in the shape of returning shorebirds, will be hitting mudflats and flooded fields in California on their way south to wintering grounds in Central and South America. This movement continues well into late fall and early winter as shorebirds, passerines, raptors, and ducks all wing their way southward.

All along the route, these birds rely on suitable habitat to provide shelter and places to rest up and fuel up. One of the most fascinating to me are migrant “traps,”  as birders refer to desert oases, that provide havens to birds as they migrate across arid landscapes. Here, in these hostile environments, a wastewater treatment plant, desert spring, golf course or well-watered college campus can often play host to a staggering number and variety of birds who find themselves out over the barren desert as the sun rises on these mostly nocturnal migrants.

The Salton Sea also plays a well-known and important role as a stopover site for a wealth of waterfowl, shorebirds, waders and more, and that is the reason that we conduct regular surveys there. However, the brushy edges of the sea also provide refuge for a host of land bird migrants. Here, introduced tamarisks as well as native shrubs and trees can play an important role in the survival of migrating birds.

When I arrived at the north end of the Salton Sea on April 29, I quickly realized that there was an incredible morning flight of these migrant land birds dashing through the desert scrub along the shoreline of the sea. These individuals were either reorienting themselves somewhat, following the previous night’s migration, or just trying to push a few miles farther while conditions were good. The numbers of birds involved were staggering and hard to process as birds streamed past me, heading north.

I paused momentarily at a small pool of water at the North Shore Marina boat ramp and watched as a dozen-plus birds at any one time stopped to bathe in the shallow water and perhaps grab a thirst-quenching drink. Most of them were Wilson’s Warblers, one of the most abundant migrants towards the peak of California songbird migration, and the spiffy yellow males with their black caps put on quite the show. Other warbler species cycled through the puddle, too, including Hermit, Townsend’s, Yellow-rumped, Yellow, Nashville and Common Yellowthroat. It wasn’t just warblers, though, and there were some interesting and unexpected species among the throngs. A large group of uncommon Brewer’s Sparrows, a Green-tailed Towhee (a bird of the mountains here in SoCal), and a couple of White-crowned Sparrows of the Rocky Mountain subspecies, rather than the expected western ones, added to the performance.

As hard as it was to not be completely distracted by this incredible spectacle, there was work to be done surveying waterbirds. Out on the marina pond itself there was a nice mix of species, including some of the world’s fanciest shorebirds: a hundred or so Wilson’s and Red-necked Phalaropes. The phalaropes are interesting for a few reasons, but mainly because they flip the script on what most people know about bird plumage: that males are bright and garish, and females dull and cryptic. Phalarope females get to have the ostentatious breeding plumage because they are polyandrous, mating with multiple males and leaving them to raise the chicks on their own. I’ve been lucky enough to see the Red-necked on their breeding grounds in Alaska and they are always a highlight of any birding experience.

The big numbers and interesting mix of migrants continued along the eastern edge of the Salton Sea throughout the day including a continuing slew of Blue-winged Teal (a bird whose numbers are growing at the sea) and a rare Neotropic Cormorant among the notables. The cormorant is a species expanding its range from Mexico into Southern California, and though somewhat common along the south end of the sea now, it is still rare at the north end. One of the highlights of the day was a lunch break stop at the Wister Unit at the southeast corner of the sea for some more birding (what else?). Here palo verde trees were loaded with migrants, including another rare Green-tailed Towhee and a mix of more expected species including dozens of flashy Western Tanagers, their red and gold plumage complementing the pretty, yellow blooms of the trees.

A rare Purple Martin topped off the day’s birding highlights. Out east, this species has become almost solely reliant on manmade houses for nest sites, but here in the west they still utilize natural nest sites such as abandoned woodpecker cavities. This rounded out another wonderful day at the Salton Sea, again confirming the incredible value of this weird and wonderful place to migratory birds of all shapes and sizes. Though the next day’s surveys yielded more birds it was clear that most of the wave of migrants had moved on, north to breeding grounds. Hopefully, we will catch them and their young on the return journey. 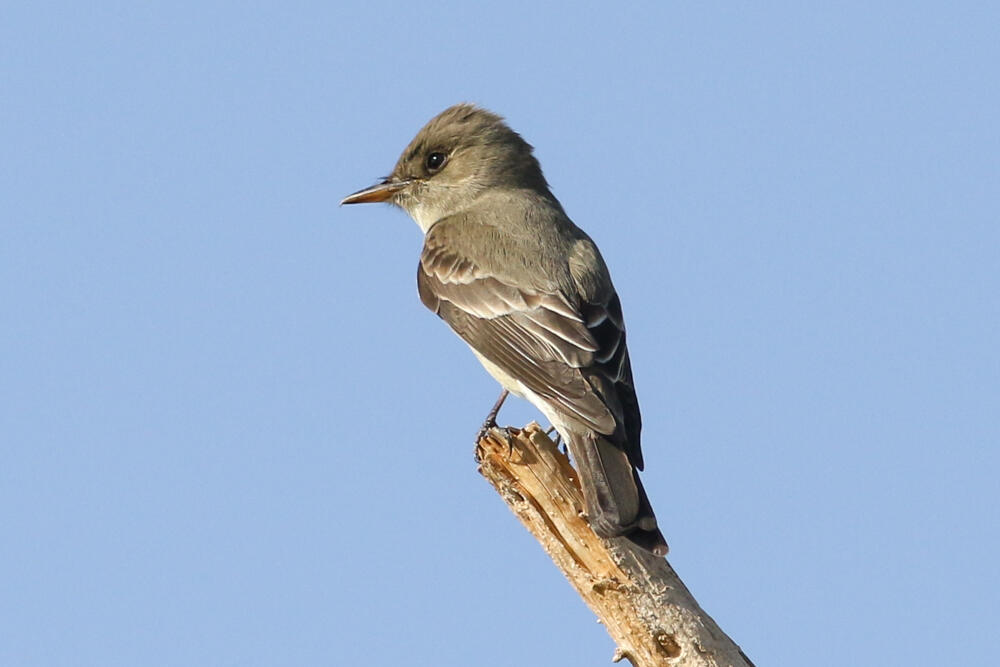 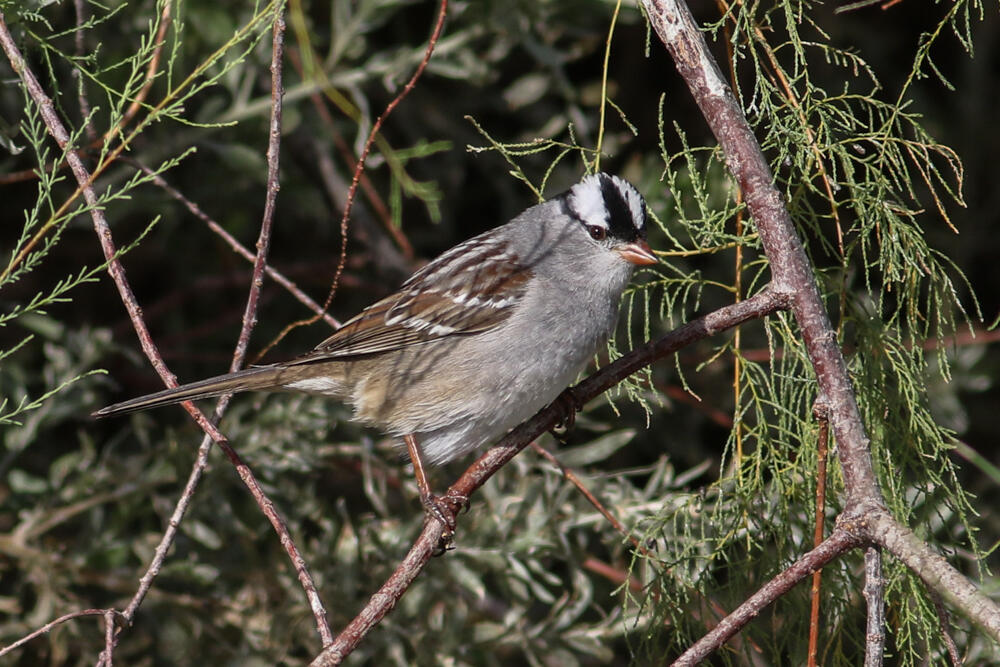 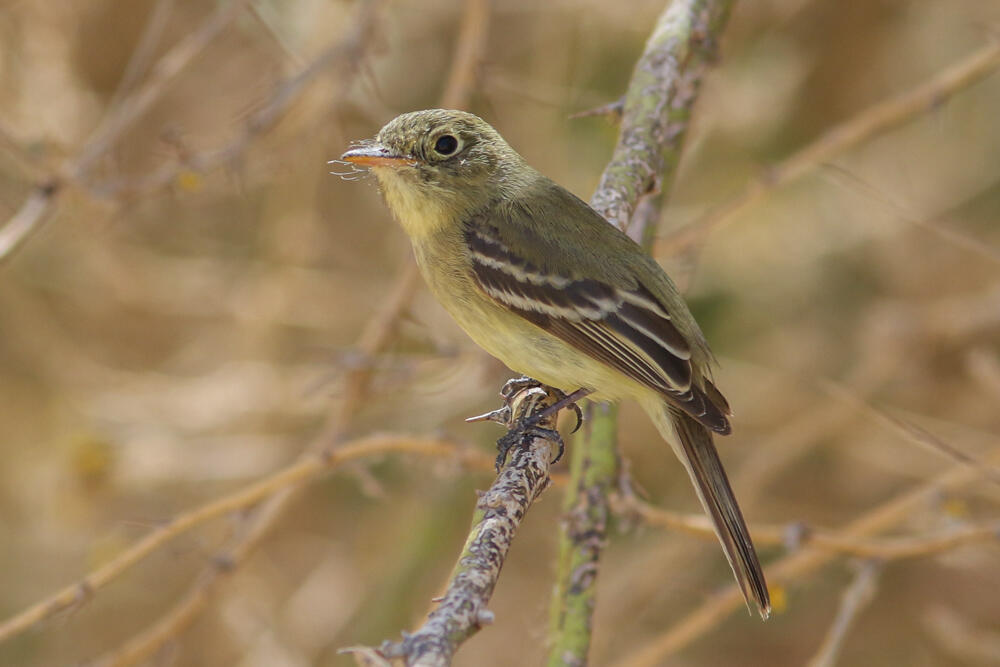