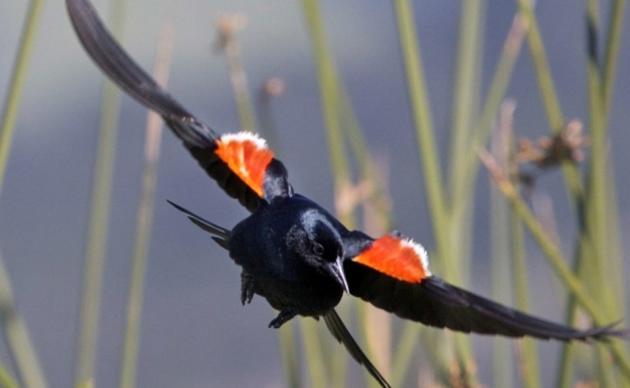 We’ve done the math -- guaranteeing that a Tricolored Blackbird can fully fledge works out to about $1/bird. It’s a small price to pay to protect this beautiful species.

We’re in mid-April, and that means that Tricolored Blackbird nesting season has begun in earnest in California. If you’ve been following Audubon California for a while, you know that we’ve been working hard over the last decade to ensure a future for this struggling species.

Audubon California is also working with a number of private landowners to create safe nesting habitat for the birds.

Tricolored Blackbirds live almost entirely in California and once numbered in the millions, but their population has declined to a fraction of what it once was. The latest survey of the birds found only about 178,000 remaining.

The reasons for this decline are many, but the loss of marsh and nearby feeding habitats along the coast and in southern California and the Central Valley is the main issue. With the loss of native habitat, the species has become dependent on agricultural lands, with most of the largest colonies nesting in grain fields. A real dilemma develops because Tricolored young typically have not yet left the nest before the time farmers harvest their crop, and harvesting destroys Tricolored Blackbird nests and young. Thousands of chicks can be lost in a few minutes.

In recent years, Audubon California has partnered with the Natural Resources Conservation Service, the U.S. Fish & Wildlife Service, the California Department of Fish and Wildlife, and the dairy industry to strike agreements with farmers to delay harvests to allow the young birds to fledge. These agreements with farmers have saved many thousands of Tricolored Blackbirds.

And Tricolored Blackbirds are already making their nests. Four sites have been identified in Merced County, along with two in Tulare County, and one in Kern County. Some of these already have chicks in nests.

The California Fish and Game Commission is expected to make its decision on the listing this Thursday. The California Department of Fish and Wildlife has recommended listing based on its review of the best available science.

If you would like to support our work protecting Tricolored Blackbirds, please consider making a donation to the program. Every little bit helps ensure a future for this great California bird.