Audubon California named the Western Sandpiper as one of the nominees for 2016 Bird of the Year not just because it is one of our favorites, but because it also appears in some of the most important places we’ve been working over the last year. For instance, you can find it in San Francisco Bay, where we helped pass Measure AA to support wetlands restoration, and you can find it in the Central Valley, where we partner with other NGOs and rice farmers to enhance shorebird habitat on working lands. Their presence at the Salton Sea, Owens Lake and other sites only reinforces the Western Sandpiper’s role as a key bird for conservation.

Telling the difference between the Western Sandpiper and the Least Sandpiper is tricky. If you stare long enough you can tell the Western Sandpiper is larger, has a more elongated body, a longer drooping bill and its hue is grayer overall. Staring at small sandpipers can be like looking at a 3-D optical illusion, where eventually different species emerge from what seems like a mass of the same small brown birds.

The Western Sandpiper breeds in the Arctic tundra of northwest Alaska, and winters along the Pacific coast of North, Central and South America. It uses habitats in California to rest and refuel on the long flights between the breeding and wintering grounds. Here in the Golden State, they feed on soft-bodied invertebrates, like worms and larvae, buried in the mud of flooded agricultural fields in the Central Valley and hidden in mudflats of coastal estuaries. Flocks forage in shallow water and at the edge of the mudflat finding hidden prey by probing with their sensitive bills.

Populations of Western Sandpipers, along with numerous other shorebirds, are declining in large part due to habitat loss. Preserving existing habitat and creating new habitat for shorebirds in California is of paramount importance, especially during migration. You might be surprised to learn that shorebirds returning from the breeding grounds need habitat here in California as early as July.

Shorebirds are fun to watch as they move methodically across open habitat, but it will always be difficult to differentiate the smaller species from one another, even with a clear view. We continue to support shorebirds and their habitat so everyone has the chance to sit and observe the optical illusion where the Western Sandpiper stands out from the crowd.

Khara Strum is a Conservation Project Manager with Audubon California. 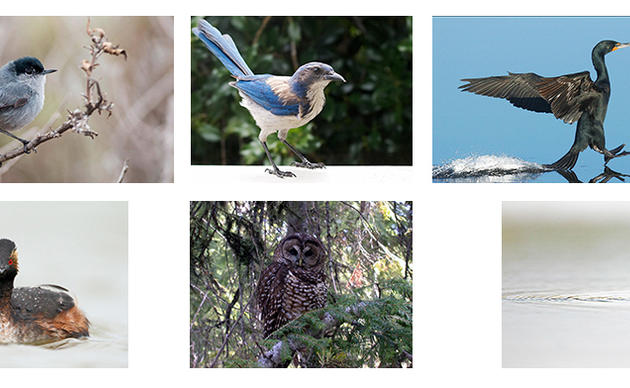 Who's YOUR Bird of the Year, is it: CA Scrub Jay, CA Gnatcatcher, Double-crested Cormorant, Eared Grebe, No. Spotted Owl, or Western Sandpiper?