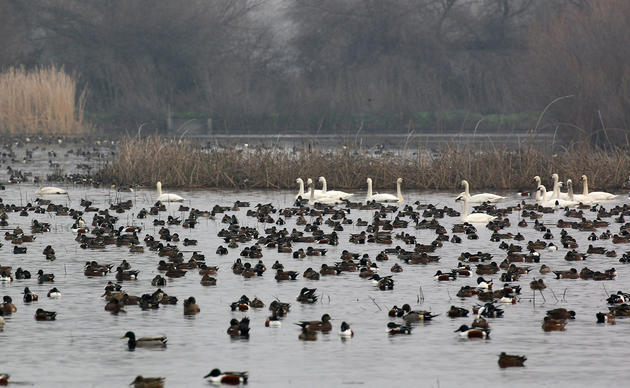 Sacramento, CA – New legislation introduced on the first day of the 115th Congress could have disastrous results for birds and other wildlife in the Central Valley, according to representatives of Audubon California. The bill, authored by Congress Member David Valadao, will reverse Congress’s commitment to provide water to Central Valley refuges, undermine the Endangered Species Act, and cancel the restoration of the San Joaquin River.

“Certain legislators are using the drought as an excuse to wipe out common sense environmental protections that they have always opposed, and that a majority of Californians have supported for decades,” said Michael Lynes, Audubon California’s director of public policy. “This bill reflects anti-environmental extremism of the worst kind – it’s all about taking more away from the environment, and decimating California’s fisheries and refuges, as a favor to corporate agricultural interests.”

The introduction of this legislation follows the insertion of language into the Water Resources Development Act late in the Lame Duck Congress that gave proponents of the new bill much of what they already sought in terms of the ability to move water through the Delta with fewer constraints under the Endangered Species Act.

A century ago, millions of acres of Central Valley wetlands supported 40 million migrating waterfowl along the Pacific Flyway. By the 1980s, however, 95 percent of those wetlands had been lost, primarily to supply land and water to California’s sprawling agricultural industry. Farmers benefited from heavy federal subsidies to build the Central Valley Project and deliver inexpensive water from the northern half of the state to the arid San Joaquin Valley. As many large industrial agricultural operations flourished, habitat disappeared and fish and wildlife populations plummeted. Today, 19 Central Valley refuges form a fragile and essential backbone of habitat that millions of birds and other wildlife depend on for survival.

Acknowledging the massive impacts to wildlife from the Central Valley Project, Congress in 1992 passed the Central Valley Project Improvement Act (CVPIA) to make protection and restoration of habitat for birds, fish and other wildlife a co-equal goal of the Project. This legislation mandated minimum allocations of water to the network of federal wildlife refuges, state wildlife areas and private wetlands in the Central Valley. Congressman Valadao’s legislation would strip away that purpose and increase diversions of water to at great expense to fish, wildlife, and California’s natural history.

“Birds, fish, and other wildlife are suffering right alongside other sectors of the Central Valley due to this drought,” added Lynes. “This legislation would turn our backs on the decades of investments in building and protecting California’s refuges.”