We have entered our 10th and final year of Black Oystercatcher productivity monitoring.  Thank you to all of the volunteers who have together dedicated thousands of hours towards this project—and to our agency partners. Final reports will be available after the 2021 monitoring season and data will be available for download on the Multi-Agency Rocky Intertidal Network platform.

The Black Oystercatcher is the charismatic, signature bird of the rocky intertidal, one of California and Oregon’s iconic habitats. Commonly seen yet globally rare, there is no mistaking the bright orange beak or distinctive call of California and Oregon’s only year-round resident rocky intertidal bird. Black Oystercatchers exert substantial top-down influence on intertidal communities through their predation on limpets, mussels, and other invertebrates. There are thought to be no more than 12,000-18,000 of these birds ranging from the Aleutian Islands through Baja.

Until recently little was known of Black Oystercatcher status and distribution in California and Oregon. This lack of information has constrained conservation activities that could help secure the species. Since 2011, a unique collaboration coordinated by Audubon California and Portland Audubon has worked to collect baseline information, describe threats to its population, and develop conservation strategies.

In 2011 Audubon California designed and led the first-ever population assessment of Black Oystercatcher in California. The peer-reviewed results are available here.  Over 150 participants drawn from coastal chapters and from agencies found more Oystercatchers in just a part of our state’s suitable habitat, than were previously estimated for the state as a whole. Over 1300 birds and over 170 nests were detected. This allowed us to estimate that between 4749 and 6067 oystercatchers are in California.

In 2015 Portland Audubon initiated a 3 year population survey along the Oregon coast to build upon long-term monitoring previously conducted by the US Geological Survey and others.  The full peer-reviewed report is available here.  Volunteers collected data along 75 survey routes from 2015-2017.  Data were incorporated into statistical models to estimate Black Oystercatcher populations ranging from 506-629 individuals. Click here to learn more about Portland Audubon’s Oregon Black Oystercatcher Program. This result combined with high densities of breeding Oystercatchers in certain areas has revealed important information about the of California and Oregon oystercatcher populations to inform better conservation and management of this species.

These two-state studies went far to fulfill the range wide conservation action plan developed by the US Fish and Wildlife Service and partners.

From 2012-2021, between 50-230 individuals have conducted weekly seasonal surveys tracking nest success (through fledge or failure) of 85+ pairs of birds across California and Oregon. The program has been growing with an increase in participants and bird pairs tracked each year. In 2020 volunteers monitored approximately 165 pairs of birds in California and monitored approximately 85 pairs in Oregon.

These efforts have resulted in a robust data set that is available in detailed reports at this website, and is being prepared for publication by Audubon national science team staff and collaborators. Additionally, we are committed to ensuring our data set is available through the Multi-Agency Rocky Intertidal Network platform. Researchers, managers, students and others interested in oystercatchers and/or the relationship of oystercatchers to the ecology of the intertidal community will have access to the locations of oystercatcher breeding territories, the density of birds in these areas, and productivity associated with each territory. This will allow enhanced understanding of the status and trends of the intertidal community in state marine reserves, state parks, and other areas in the context of rapid changes due to a changing climate.

Numerous conservation activities have been initiated by partners to help preserve the species. Signs, magnets, pamphlets, lectures, and conversations with coastal users and business owners has resulted in reduced disturbance and increased public awareness of oystercatchers. These outreach materials are available at this site for downloading and use in your area.

Funding for the program has been provided by the Marisla Foundation, the Resources Legacy Fund, the Bureau of Land Management, and private donations.

How are oystercatchers doing in California?

We estimate 4000-6000 oystercatchers in California, making our state a critical bastion for the species. Productivity monitoring from 2012-2016 has found a statewide fledge success (fledged chicks per pair per year) of between 0.41-0.49. This is comparable to published fledge rates in British Columbia and Alaska. Audubon will be developing a Population Viability Analysis which will use these fledging rates and other factors to understand the trajectory of the species. Our productivity results as well as trends data from the Christmas Bird Count suggest the species is stable in California. This is great news. However, the species is highly vulnerable to impacts from a rapidly changing coastal environment. This includes sea level rise, increased storms and king tides, ocean acidification, increased disturbance from coastal users, and increased predation from corvids and other avian predators.

How are oystercatchers doing in Oregon?

Based on Portland Audubon estimates from 2015-2017, the Oregon population of Black Oystercatchers appears small but stable (minimum population of 500-600 individuals).  Productivity monitoring indicates a statewide fledging success ranging from 0.31-.68 (average = 0.55) from 2015-2020 with an average of 45 nests monitored per year.  These results are preliminary and based on nests found and monitored opportunistically. Oregon nest productivity data will be contributed to the Population Viability Analysis described above.

State summaries and Regional results (productivity and maps)
Click below for 2012-2014 state summary, and a few examples of regional reports, with exact locations of nests sites removed. Nest location information is available upon query.

Partners
We thank the many people and organizations that have made this program a success: 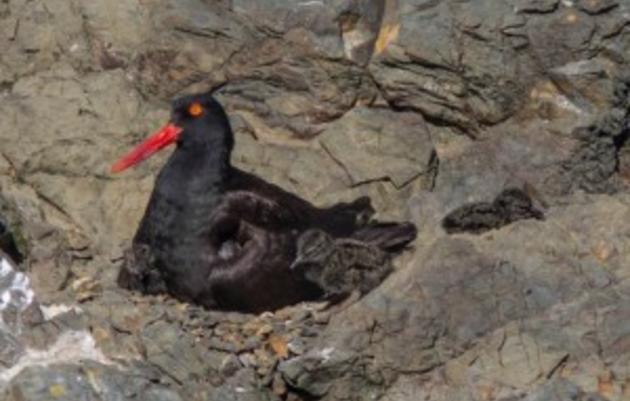 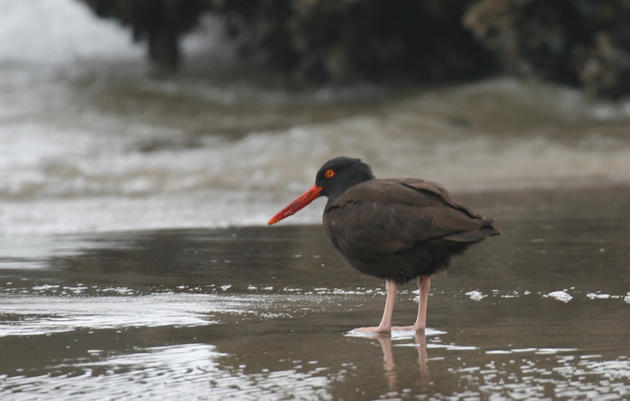 Anecdotes and stories from the field about the Black Oystercatcher 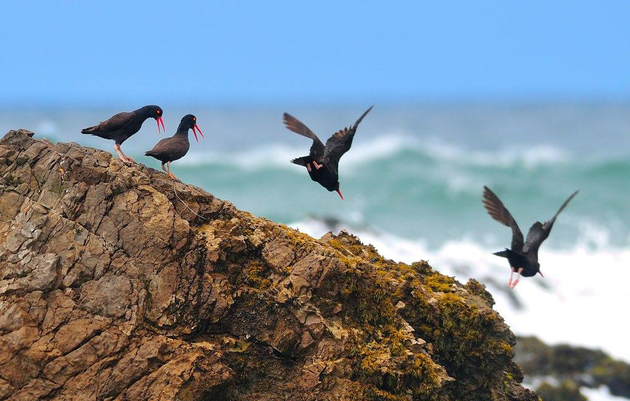 How you can help

Help black oystercatchers by volunteering, monitoring or sharing its story